A technical background of the Fairway hull design software

Fairway was conceived from dissatisfaction with existing methods for hull design and manipulation. Over the years thorough investigations of available design methods and their implementations in commercially available software have convinced SARC that the inherent shortcomings of existing techniques cannot be solved efficiently and elegantly. Rather than accepting and implementing fixes for the problems caused by these shortcomings (as has been tried in the majority of the commercially available software), SARC has developed Fairway. 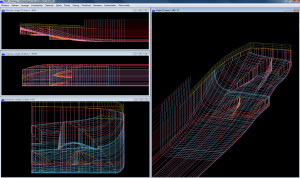 Either start a design by transforming a previously defined hull form, or start from scratch entirely. In the latter case, Fairway can generate a minimal set of lines for free-hand design.

Designs can easily be modified during each design stage, even in the final stages.

Fairway provides a broad range of tools to aid during various design stages. For instance:

Leverage the algorithms of PIAS

Simple hydrostatic analysis can be performed in Fairway directly, while complex analysis can easily be farmed out to PIAS. 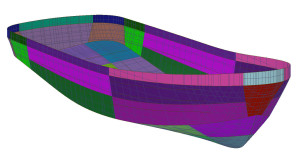 Fairway satisfies requirements of statutory regulations, quality assurance schemes and the ISM code. Fairway is accepted by all major classification societies and complies with Cat. B and C of ISO standard 16155 (Shipboard Loading Instruments).

Used by a wide range of vessels worldwide

Fairway is being used daily by naval architects around the world. In The Netherlands, SARC is the market leader with its maritime software.

At SARC, each employee is involved in both software development and design projects which utilize Fairway. New options are continuously developed, on request of users and when the need arises in-house. This ensures Fairway is always state of the art.

In Fairway, newly developed techniques and methods have been combined with existing ones where useful, to yield a versatile and comprehensive tool for hull form design and manipulation. First we will discuss the merits of the ‘existing methods’ briefly, then we will introduce the Fairway approach to tackle the problems inherent to the ‘existing’ techniques.

Some types of software use curve methods for hull representation and manipulation. Examples are SIKOB/Seasafe, SFOLDS and some PIAS modules (definition of existing hull form and hull form transformation). The major advantage of curve methods is their suitability for the conversion of existing lines plans. Curve methods define the hull surface implicitly, with curves running over the surface. In some systems the curves are represented by polynomials, whereas others apply B-spline curves or NURBS (Non Uniform Rational B-Spline) curves.

The vast majority of contemporary general-purpose CAD systems, as well as specific naval architectural ship hull design software, apply B-spline or NURBS surfaces as surface representation. The most expressive characteristics of these surfaces are that they are clamped on a regular network of curves that cover the complete surface, and that they have four sides and four corners. Shape manipulation is performed by manipulation of points relating to the intersections of the defining curves. These points are commonly called vertices, control points, poles, knots, etc.

In the course of time it appeared that the existing methods (prior to Fairway) have the following disadvantages:

To relieve the problems discussed here, one could suggest using multiple B-spline/NURBS surfaces instead of a single surface, but with that ‘solution’ three other problems are introduced:

The insight in these properties of existing methods has been gradually developed during years of research at SARC. Other researchers have come to the same conclusions, as demonstrated by the paper Challenges in computer applications for ship and floating structure design and analysis in the Computer-Aided Design journal of 2012. In order to put things into perspective, SARC published an additional note in the same journal, titled A technical note on the geometric representation of a ship hull form.

The development of Fairway has been led by the desire to produce a general computer tool for hull form definition, hull form generation and production fairing, where the mentioned disadvantages do not occur. For this purpose, SARC has developed a new type of model representation. The technical merits and potential of this new model representation is elaborated in the following sections. Fairway allows actions to be performed on points, curves, tangents, surfaces, and on the entire solid. Furthermore, any action can be performed at any given time. Thus, Fairway can be looked upon as a ‘toolbox’ for ‘work’ on, or with the hull form. The potential of this ‘toolbox’ approach is given in an incomplete outline of capabilities:

Being commenced in the 1990s, Fairway used to have a User Interface (UI) that allowed for graphical as well as alphanumerical operations, although the combination of the two was not as fluent as is possible with post-2K hardware and software. For that reason in the years 2010-2014 the UI was replaced with a newly designed GUI, which offers the following advantages.

The fact that the GUI is in full production does not mean that Fairway is put in maintenance mode. In fact, an important objective for the renewal of Fairway was to enable us to extend it with new capabilities and concepts. These are some of the things we are working on and ideas we have for the future:

For input of existing hull models, Fairway accepts a wide range of input data formats, either directly or through pre-processing.

Once a hull form is defined in Fairway file format, regardless of the source of the input data, Fairway can generate numerous output formats:

Fairway is designed for the Windows platform, requiring Windows 7/8/10 or 11 to function properly.

Fairway, like PIAS, is delivered complete with installation, training, operation instruction manual and SARC can provide for the approval by classification society. Through a password-protected section on our website the latest version of the software and manuals are always available for download. Please contact us for further information. 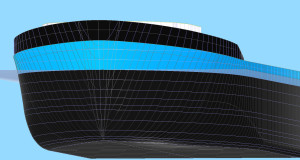