PIAS, which is an acronym for Program for the Integral Approach of Ship design, is an integrated computer program for ship design. It comprises, among others, modules for the design of hull and internal geometry, and for the computation and assessment of intact stability, (probabilistic) damage stability, longitudinal strength, resistance and propulsion and much, much more.

PIAS can be used in all design stages, from the first preliminary sketch up to the final design, including the related delivery documents. PIAS’ calculations have been approved by major classification societies, and are executed according to the different international regulations, such as IMO, SOLAS and MARPOL.

On this page the background of PIAS is elaborated, and specific functions and options are discussed into more detail.

PIAS has no limitations concerning the shape of the hull form. It can deal with monohull and multihull ships, knuckle lines, a bulbous bow, one or more propeller tunnels, rise of floor, rise of keel or an asymmetric hull form. Besides ships, numerous other floating objects have been defined and calculated with PIAS, such as a floating swimming pool, a 300m floating flood barrier, floating segments of motorway tunnels, offshore barges, et cetera.

PIAS is written by naval architects; all necessary functions are included, while superfluous gadgets are avoided. Furthermore, quite some research effort is devoted to develop and explore geometric modelling methods, which is reflected in user-friendliness on a level which is more fundamental than the visual layout only.

You only purchase those modules which are actually needed for your business. In-depth details of our PIAS modules can be found below.

Used by shipyards and architects worldwide

PIAS is being used daily by shipyards and naval architects from around the world. In The Netherlands, SARC is the market leader with its maritime software.

PIAS offers a wide range of industry standard output and report formats. Please refer to the Modules page for an exhaustive list.

At SARC, each employee is involved in both software development and design projects which utilize PIAS. New options are continuously developed, on request of users and when the need arises in-house. This ensures PIAS is always state of the art. 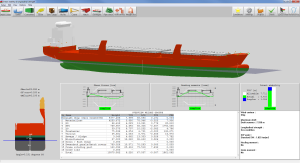 Definition of loading conditions, using miscellaneous aids, such as:

Computation and assessment of intact stability:

For deterministic damage stability calculations, damage cases are defined by selecting a number of defined compartments. Permeabilities for the ingress of seawater may be set for each compartment separately, as indicated in the applicable regulations. Available functionality is: 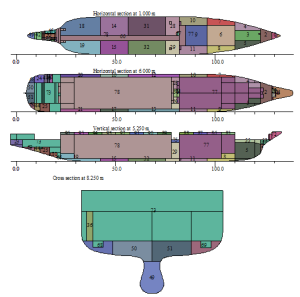 PIAS provides one single module for probabilistic damage stability, which supports all present and past regulations: IMO res. A.265, SOLAS 1992, SOLAS 2009, dr-67 and dr-68 (for hopper dredger with reduced freeboard). Besides from the option to perform the calculations in a standard and approximative (zone-based) way, PIAS also offers the options of taking into account a much more exact calculation procedure, based on the real shape of the compartments.

More details of the PIAS approach can be found in the paper ‘A new method and program for probabilistic damage stability’, as presented at the Compit’06 conference.

PIAS offers a number of resistance and propulsion options: Definition of hull forms can be performed in different ways:

Internal geometry comprises the shape and topology of compartments, bulkheads and decks. For modelling of these items, PIAS offers three mechanisms: 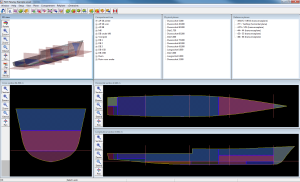 The first two definition methods may seem unrelated, however, a novel method has been developed and implemented, which ensures compatibility between the two. Further background on this method can be found in the paper presented at the Compit’11 conference.

Furthermore, the geometric definition can be supported by reference planes, which will make design modifications very quick and robust. And finally, auxiliary data, such as names, type of space, sounding pipes (with two pipes for each compartment), pressure sensors et cetera, is co-defined and co-visualized with the compartment shape.

If the hull form is defined on basis of cross sections, the calculation basis is formed by integration of these sections, and a subsequent longitudinal integration of those integral parameters. However, if the hull has been designed with Fairway a complete surface model is available, which can be visualized and exported.

PIAS is equipped with a facility to import ASCII-based tabular frame shape data. Furthermore, hull data can be exported to other ship analysis software, such as for sea keeping, while the internal geometry modelling module has export facilities to Poseidon, the rules program of DNV-GL. Fairway, as being the hull form design module is equipped with additional import and export facilities, such as DXF and IGES, which is discussed into more detail in the Fairway documentation.

PIAS comes with full support for the user. Most user questions can be answered over the phone, but when necessary, models may be exchanged for in-depth support. All SARC employees are actively involved in development, sales, training and project engineering, so expert user support is always available.

Manuals are included with the software, and also available online. New software and manuals can be downloaded from our website, enabling users and their PIAS setups to stay up-to-date with the latest functions and developments.