Introduction
The seasoned PIAS user will have experienced that from time to time a module is subject to a radical rewrite or even a complete redesign. We have seen that the past years with the Fairway GUI, and with Compart being replaced by Layout. You will not have noticed yet, but some month ago we started the overhaul of Loading. For a variety of reasons, from which the most noticeable for the PIAS users will be:

A first step in this process was the systematization of the alphanumerical menus of loading conditions and weight items. This was in-house released at SARC a few months ago, and has been thoroughly tested ever since, so now is the right moment for a general release. Not all changes will be commented here, many will be clear and obvious. However, some imply a change in operation, and will be elaborated further below.

Total weight and COG of a loading condition
Was once listed in an additional row at the end of the list of weight items. This has been replaced by an additional floating window with totalized weights and COGs. This window can be kept open besides other floats, such as for intact stability or longitudinal strength. 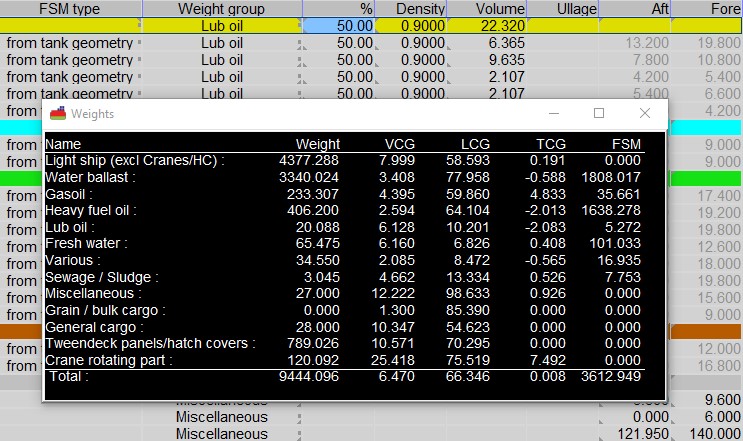 Missing tanks in Loading
The option to define an individual row to contain a certain tank (as defined in Layout) has been discarded. Instead, the upper menu bar now contains an option labelled “Add missing tanks”, which will add missing tanks that still have been assigned (in Layout) to be used in Loading. With this option all new tanks can be added to the loading condition with a single command.

Advice function
This function computes the weight and COG which are required to achieve a desired draft / trim combination. It has been restyled, and is now able to add a new row containing this weight.

Corresponding changes in Layout
In order to facility some present and future functionality in Loading, the property set of a compartment has been extended a bit. For this moment, the most relevant addition is:

With this modification in Layout we also used the opportunity to include all compartments’ parameters in the compartment overview list. This has been a request of multiple PIAS users.

Redraw menu list of weight items
Due to developments in the software, it is possible that the menu with the weight list is temporarily redrawn a little more often. This will disappear again in the near future.