Diagram indicating the maximum allowable anchor chain forces during anchor handling, according to NMD-2007 and BV-2014

In June 2007 the Norwegian Maritime Directorate (NMD) released the Guidelines for immediate measures on supply ships and tugs that are used for anchor handling, where additional stability criteria for vessels engaged in anchor-handling are presented. Under effect of the anchor chain force, the heeling angle is limited to:

The 2014 BV rules contain similar criteria, albeit with different output format requirements. Both sets are included in LOCOPIAS.

In order to assess the compliance of a particular loading with these criteria, for each loading condition a polar diagram can be plotted, as an extension to the calculation of intact stability, which contains the maximum allowable anchor chain force, as a function of the anchor chain angle. 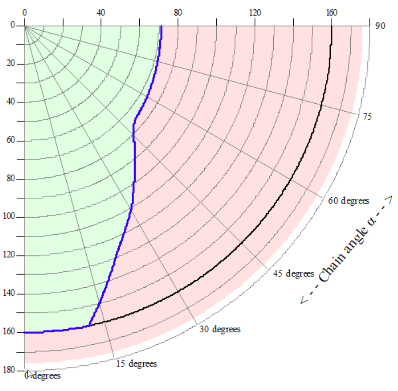