The Damen Shipyards Group is a globally operating company currently operating 36 shipbuilding and repair yards. Since 1969, it has designed and built more than 6,500 vessels. Based on its unique, standardized ship-design concept Damen is able to guarantee consistent quality.  Damen has been a SARC customer since 1988.

Since the end of the last century, Damen has been using PIAS to calculate intact and damage stability as well as designing a wide range of products, including tugs, workboats, naval and patrol vessels, high speed craft, cargo vessels, dredgers, vessels for the offshore industry, ferries, pontoons and superyachts. From the very beginning, there has been close contact between the two companies so that we could hear first-hand how PIAS is being used.

First-hand experience is important to us as a company. This includes the input we receive from Johan Nobel, a Naval Architect at Damen. He is currently involved in the company’s basic and detail design phases and engineering for workboats.

As mentioned, Damen has been a customer of SARC since 1988 and it was not long after this date that Johan Nobel started working there. For him it started with a beginner’s course and since then he has been busy with PIAS every day. In the first years, he was often on the phone with our programmers to pass on points for improvement. Nowadays, he still passes on suggestions a few times a year. We also give these suggestions serious consideration and, where necessary, incorporate them into our programming plans.

Because Mr Nobel has been working with PIAS for so long, more and more of his colleagues ask him for help when it comes to PIAS. He has standardized some items and trains colleagues internally for PIAS.

PIAS is used by Damen for stability calculations, preliminary and final stability booklets for ships under construction. He says about this: “A lot of standard products are built at Damen, but every ship is unique, certainly with regard to stability.”

In addition, at Damen PIAS is also used for inclining tests and for the lifting of ships. These longitudinal slopes have different angles at which the nose of the ship first rises and the stern remains in the water. A situation can therefore arise in which the ship gets a negative G’M. The type of ship as shown below was provided with extra ballast at the back in order not to increase the force of the front cradle too much. For this ship, Damen also checked with PIAS whether the edge of the box cooler would remain above water. 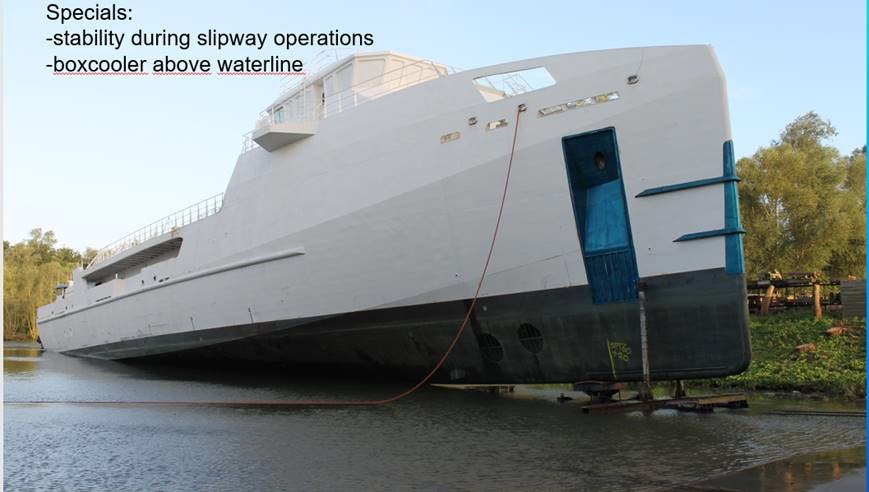 In 2018, Damen conducted an internal investigation into which naval architectural calculations software would best suit them. Finding this out was quite a task. In addition to a presentation, SARC also provided five user cases. The result of this investigation recommended to continue with PIAS, as the main stability calculation application.

Mr Nobel expects more and more complicated regulations in the future, which will make it difficult for new users. He does indicate, however, that, “The software is easy and logically built, there is direct contact with SARC and this can also be done in Dutch directly with the programmer.” The direct contact between our development department and the customer ensures that we can assist the customer in the best possible way.

Besides PIAS, we also supply LOCOPIAS, on-board loading computer software, for many of Damen’s ships. Finally, Mr Nobel would like to pass on the following: “I am convinced that it is a great advantage to work with the same program.” SARC can use the client’s PIAS database and create the LOCOPIAS with it. As soon as another program comes on board, data has to be transferred and this always means a loss. In addition, it is also double input work and that is a waste of time.”

All in all, Damen has been a PIAS user for more than 30 years with over 20 licenses worldwide, and SARC also supplied dozens of LOCOPIAS versions for their new build vessels. That makes Damen one of our most loyal customers and we are proud of that.